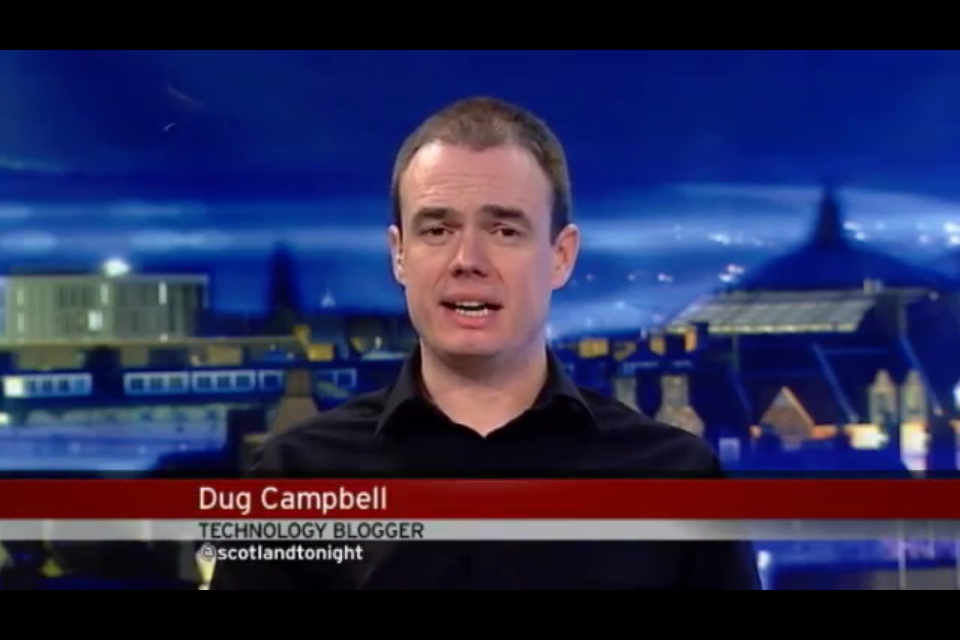 It’s been a busy week after STV got in touch to ask me to comment on the news that the Brooklyn Cafe in Glasgow had become the first in Scotland to accept bitcoins in payment over the weekend. I gave a street interview for the 6pm News, and followed that up with a live studio appearance on Tuesday night – you can check it out below:-

Whilst there wasn’t enough time to go into any depth on the subject, I’m delighted to see Bitcoin continuing to push through into the mainstream public consciousness. I’ve been interested in the topic for a while now and I’m convinced that digital crypto-currency is here to stay. Whether Bitcoin or another of the alt-coins will be the ultimate winner here is unclear but moving to a digital currency provides such significant advances for us all in a world that has changed immeasurably over the last few decades that once you get your head around the basics, I find it hard to imagine any scenario in which it won’t become a necessity around the globe.

I have exactly the same feeling about this as I did when I came across the original incarnation of Napster around the turn of the century. Whilst it soon became clear that the obstacles to the development of the peer-to-peer sharing were going to be insurmountable for Napster itself as an organisation, it was abundantly clear to me (and many others, I should say) from the start that it would be impossible to suppress a technology that transferred content with such ease.

As history shows, peer-to-peer technology was forced to evolve under the shadow of various legal threats. End users found the immediate transfer of digital content too compelling to simply forget, despite the various legal issues. And it was precisely this perceived value that drove innovators to continue to evolve the solution until content was ultimately being transferred on a decentralised network using decentralised software, avoiding a central organisation which would always be vulnerable to attack. Existing businesses simply had to find a way to work within this new world or perish – a struggle too far for many layers of the traditional entertainment industry.

To me, Bitcoin – and more specifically digital currency – displays many of the same characteristics. Not simply in the way in which it relies on peer-to-peer technology but in the fact that it will continue to evolve. But in this case, it’s not ‘simply’ entertainment that’s ripe for disruption. The change that it’s driving will be felt far beyond the world of finance alone.

Bitcoin’s single most important innovation is also its greatest strength – the distributed public ledger. This is a record of every single transaction that takes place using bitcoins, confirmed every 10 minutes across all of the network’s computers. If you’re spending money, no longer do you need a trusted 3rd party (e.g. bank) to confirm (for a fee) to the seller that you actually have that money. If the network says you have 10 bitcoins, you’ve got 10 bitcoins. You can now rely on the network to prove that you have the money you say you have.

The benefits are just too powerful to ignore.

These are just a few basic areas. The reality is that the list goes on and on. But despite its limitless potential, Bitcoin’s adoption faces clear barriers. The general public continue to read media reports that constantly refer to its current volatility as a currency and its use in facilitating otherwise illegal transactions. We’re so early in the cycle that people are focusing on the immediate financial gains (and losses) and not hearing just how important Bitcoin is going to be as a protocol (a method of exchanging data over a computer network) – which in itself is shaping up to be one of the most significant inventions since the advent of the internet itself.

The speed of development in the world of Bitcoin is fast but there’s still a timelag whilst we wait for enthusiasts and startups to develop the killer usability that will enable the average man in the street to both understand it and then to adopt it.

I honestly believe 2014 is the year that Bitcoin will explode into the mainstream in a way that seemed unlikely maybe 18 months ago. The current market cap of the Bitcoin economy is currently over £6.7 billion, HMRC are said to be looking to reclassify bitcoin in the UK soon, bitcoin ATM’s are spreading around the globe and businesses are slowly but surely introducing it as a payment option (Overstock.com in the US being the highest profile retail organisation to do so so far).

To be clear, I don’t advocate piling your life savings into it. It’s currently risky as a short-term investment, driven by speculators and its success in maintaining its position as the number one digital currency is still uncertain. But, in my view, the benefits of crypto-currencies are just far too significant to disappear. The concept of decentralised finance is here to stay and the problems that it has been designed to solve only get more pressing with each day that passes. So please, if you are going to do one thing this year, do yourself a favour – read up about it, question it sure but above all try to understand what’s going on.

And, as ever, if you want to chat Bitcoin, get in touch!

One thought on “Discussing Bitcoin On TV”