This is a lovely story.

‘Opportunity’ was the name of the rover that NASA landed on the surface of Mars back in 2004. It was designed to last just 90 Martian days and travel 1,000 metres.

Instead, it survived for almost 15 years and broke the record for the furthest distance travelled off-world (ie Earth) at over 28 miles.

This little overachiever did many things – not least of which was sending us confirmation that the history of Mars included time as a wet planet that was suitable for habitation.

So it’s not surprising that the folk responsible for coaxing that little rover across the darkness for many years felt a tug at the heartstrings when it – finally – gave up the ghost following a particularly heavy Martian sandstorm last year.

The last signal was received on June 10th 2018. All subsequent attempts to communicate failed – and NASA have finally now pulled the plug.

You've probably heard about how Opportunity's last words to NASA were “my battery is low and it's getting dark.”

What you may not have heard is NASA's last words TO Opportunity: as a final transmission to the rover, they played Billie Holiday's "I'll Be Seeing You." pic.twitter.com/iR7xzYQAri 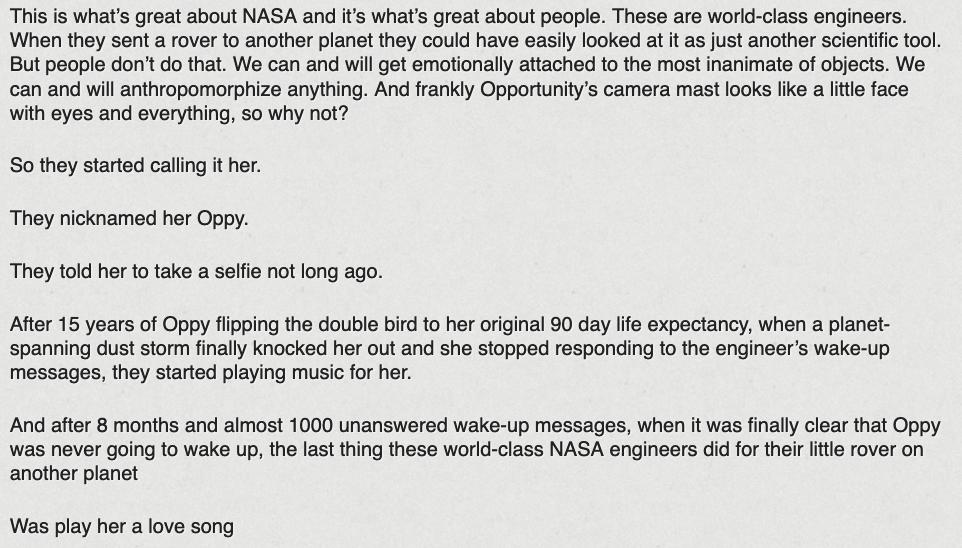 It’s not hard to imagine that if we get this all wrong – the overpopulation, the nuclear game theory, the global warming – we’ll end up sealing our own fate here on Earth. And many years down the line, some other civilisation will stumble across one of our furthest explorers and be struck with exactly that same sense of wonder in considering what became of us as we hold today about that hot red planet.