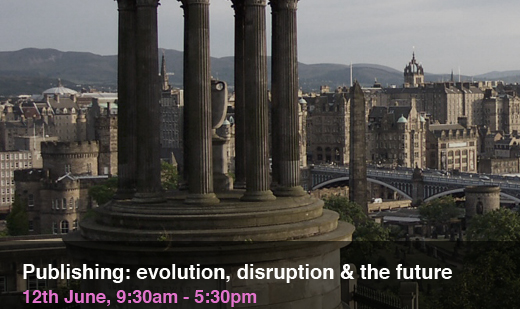 Notes from the Edinburgh Publishing Conference which brought together a wide range of experiences from across the publishing industry under the title ‘Publishing: Evolution, Disruption & the Future’.

In this post, Cameron Neylon, Advocacy Director of the Public Library of Science (PLOS) opened the day.

Cameron started off with a couple of soundbites from Clay Shirky:-

“Publishing is no longer an industry. It is a button”

As we all know, you can now publish directly yourself wherever you are and that publication has at least the potential at least to reach millions of people. However, we must be aware of the dichotomy of publishing: ‘making something public’ is very different to turning it into a product that someone else is willing to pay for.

In the video of his talk from 2008, what Clay is actually saying is that it’s not the question of whether the vast flood of information that is coming at us is a good thing or not that we should be concerned with. Instead, we need to be aware that our filters through which we receive relevant information have been broken down due to nature of the internet. This is all part of the process by which power has changed hands from being in the hands of the few to the many. The real question is how do we take the existing value-chain, tools, organisations (old and new) in the publishing industry and create  the filters that are essential to ensure that, whilst we allow anyone to publish, that information is filtered in order to maintain its value.

The history of scientific publishing developed from the growth of the research community in the seventeenth century in which researchers sent out their own letters directly in order to update other members of the community with their progress. In order to build on efficiencies of distribution, this developed so that these items were communicated via short articles in journals.

The result was that, up until very  recently, the standard business model for scientific publication was subscription (primarily by academic libraries). Journals were generally collated by organisations (publishers) that acted primarily for profit. Of course, research tended to be publicly-funded (in order to create a public good). That value was transferred (with copyright assigned) free-of-charge  to the private (commercial) organisations who would then deal with the publishing and the peer-review process (whereby scientists would provide their services, again free of charge).

At one level, there’s an obvious issue here. The entire costs of production of scientific publications are being paid for with public money. But the existing system is designed in such a way that we don’t then make that valuable research available outside a small group of individuals.

It’s important to be clear about the distinction between scientific publishing and other forms of publishing. Science is fundamentally a long-tail activity. The biggest market possible is maybe 10,000 people so the key questions about the correct model to use must involve consideration of lots of niche markets. However, by opening this access up, other groups of interested people from across many different disciplines will be able to access the research that they otherwise couldn’t afford (they may not have access to academic libraries, work in different areas, locations etc).

Clayton Christensen famously wrote that innovative companies don’t disrupt by appearing to be disruptive when they arrive. They work precisely because they appear to look exactly like the existing model initially whilst completely changing the rules in order to provide a product or service that is much better.

In 1994, ArXiv was set up – a centralised repository which puts research papers online and is now hugely useful to various communities, particularly for maths and physics research. Around 2000, a series of new initiatives were set up by publishers. BioMed Central (BMC) was established with the principle that scientific information would be freely available online. BMC started off with the idea that advertising would cover the costs but this didn’t work (for obvious reasons in retrospect – niche market, long tail). It therefore flipped to an ‘author-pays’ model. To those who are unfamiliar with scientific research, this may sounds like vanity publication. However, it is far removed from that because the existing quality control mechanisms (i.e. peer review) remained a vital part of the process.

Ultimately, the new model comes down to a change in mentality. If you carry out a very important piece of research that cost a couple of million pounds,  and it simply sits in your drawer unread, it’s useless. Therefore, the cost of publication in order to get that work out to a wider audience means that the ‘author-pays’ model is  likely to be attractive.

Public Library of Science (PLOS) then built on the success of BMC. PLOS was designed to be highly selective in order to ensure that publication remained prestigious. By ensuring that it was difficult to get into it, they were able to create a brand around the organisation. It’s worth noting that both BMC (for-profit) and PLOS (not-for-profit) are sustainable businesses and that both now turnover in excess of $20m p.a.

PLoS wanted to set up a journal that takes advantage of the internet’s attributes whilst maintaining that essential quality standard. The traditional journals would say “we publish the most important and interesting articles”. Yet it’s almost impossible to predict what will be successful or what actually matters in time. So when PLOS ONE  was launched in 2007, it agreed to publish every piece of research provided that it met the quality criteria of having been ‘properly done’ in science. In 2010, PLOS ONE became the largest journal in the world and it continues to grow.

Scientific publishing is fundamentally different because it was developed as a means of peer-to-peer communication, as opposed to a broadcast system. Although science  has fallen behind in many ways in embracing the disruption that has engulfed all other parts of the media, Cameron now argues that it is where you should look to see what’s coming in the future. Sure, the mass media opportunities will continue to be controlled by a few organisations. But the second set of opportunities in publishing come from within the networked world, where the long tail of interest can be used effectively to serve niches that the large organisations couldn’t dream of serving. And, to use Clay Shirky’s words, that is where we’ll develop the filters that are truly useful. And that is the future of publishing.