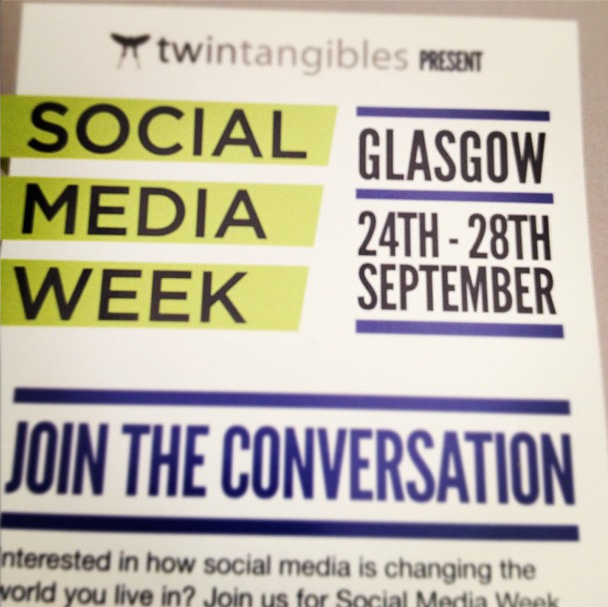 Who is responsible for pushing the adoption of social media within the workplace? Should you be relying on management to push acceptance down throughout an organisation? Or is the reality that only the janitor can have the necessary passion to evangelise a medium, building confidence at the grass roots which ultimately can’t be ignored? Who can you rely on to push for access at work?

Social Media Week is upon us again and after a packed day, I managed to make it across to Glasgow just in time for the start of ‘Who’s Leading? A discussion panel on access to social media in the workplace’.

Or, more accurately, I was late for the 5:30pm start. A combination of my natural sense of direction (which comes both as default and as runner-up only to Apple’s newfound mapping sensibilities) and a circuitous semi-jog to the venue later (never a good idea when your knees are filing for divorce in the middle of the 5×50 challenge) led me to the McCance Building – following which it soon became clear that it was in fact a 6:30pm start. Hmm. Not ideal. But to be fair the organisers did their best to apologise on Twitter to the assembled grumbling tweeters so no damage done.

After bumping into a few well-kent Twitter profiles in the flesh, it was on to the panel discussion.  If you were following the hashtag (#SMWWhoLeads), you’ll have seen a fairly lively debate around some of these issues:

As much as we love it, Twitter is not yet mass market and there is a risk for all of us that use it regularly that we see this as normality. Figures are more impressive for Facebook in terms of adoption but still it is hard to argue – at this stage – that social media is used by all. The continued growth of smart phones will help to drive the adoption of new communication methods but if we are really looking to discuss digital inclusion, we cannot forget about libraries which to this day remain one of the most trusted engagement points between governments and citizens. Or, to use the words of Louise MacDonald (@Louisemac) of Young Scot, “Libraries are ace!”

There was much debate about existing technical hurdles, particularly those faced by larger public sector organisations. The issue was amply demonstrated by one member of the audience who admitted that her NHS team were all using Internet Explorer 6. The collective release of air by the audience showed a genuine pain shared across the room – justifying a listen back to the recording of the event alone. It’s clear that logistically and financially there are issues for certain organisations.

Cracking example from NHS re using YouTube for a campaign but staff handling calls from public about the videos can’t see them. #SMWWhoLeads

I feel there’s still a real danger that by focusing too much on technology, people lose sight of the end goal – increasing effective transmission of information to enable us all to do our business more effectively. This isn’t about technology as much as it is about culture change and willingness to learn. Easy for me to say? Perhaps.

Ah – the old battle of control versus permission. So, where should adoption of social media come from? A healthy debate ensued around this subject, with some clearly advocating the top-down approach for strategic purposes. I have to say that I remain of the view that the reality is that adoption (however unofficial) tends to be driven from a more junior level – the Chris Brogan ‘pirate ship’ model.

Now, I’m not ignoring the fact that permission will be necessary at some stage and that traditional leadership must buy into the process in the future. But I do think that in the vast majority of organisations, waiting for permission is the simplest way to fall behind the curve (hat-tip to Seth Godin’s ‘Poke The Box’).

My – strong – personal view is that you should pursue adoption of social media, with or without management buy-in provided  you can be clear that it is of demonstrable benefit to the organisation that you work for. Years ago the use of telephones was restricted in a business environment. Then it was the internet. Let’s not try to pretend that communication must in some way always be sanctioned by management if it’s beneficial (according to traditional business – and not social media – metrics). Change is happening and the role of organisations is not to waste time and energy trying to put the genie back in the bottle. Their role is to ensure that the necessary risk management procedures are in place to facilitate this.

There is a permanent tension between control and permission. Gordon Scobbie’s (@DCCTayside) popular comment about “You can give a policeman a truncheon but not a twitter account” highlights the sort of issues involved. But we also have to bear in mind how instant communications directly affect existing  communications teams within organisations. We are now moving to a position where they are having to learn that they must be happy to release something publicly which may not be 100%, on the understanding that they expect to receive comments so that the release can be improved. That’s a big change for many.

There’s clearly a significant tension around the issue of big data and ‘fracking’. Peter Cruickshank (@spartakan) is involved in some fascinating academic work regarding the collision of each individual’s online personas in the digital age.  The topic is huge and could only be touched on in passing – if you’re interested, check out the article by William Wickey in the big data guide on ‘Information Fracking in the Age of ‘Data Grande’ that I stumbled upon after the event. Serious issues need to be resolved here in the near future which will determine how assumptions can be made by organisations who have increasing levels of access to our colliding personal worlds are in association with the growth of the semantic web.

So is this a good thing? At one extreme, you have companies who are using your data unfair (such as Andrew Burnett’s example of the malevolent usage of personal data by a travel site that charged different prices to website visitors according to whether they accessed via a PC or a Mac). At the other end of the spectrum, you have the potential offered by intelligent devices to make daily life easier – such as a message sent directly to your phone to notify you that your  kettle is about to break when you’re passing a kettle shop, for example.

Like it or not, when we look at traditional leadership, there is a need for reverse mentoring in this area. It’s up to all generations to understand that digital licks are required in modern business. If management don’t have them, it’s key that they seek out the people that do. In general terms, there’s an opportunity for younger generations to bring something of real value to organisations that they might otherwise not get the opportunity to become involved with.

A great start to the week and a really solid panel discussion. Great to see every member of the panel involved in following the live Twitter stream during the session and really bringing something of value to the discussion. I have to admit I was very impressed with the Chair, Gordon Scobbie who exhibited an understanding of modern technologies far beyond that which I (no doubt unfairly) had expected to see from a representative of an organisation such as the police force which must have significant hurdles as a result of its size, politics and ownership of particularly sensitive personal data.

There are a few really significant issues here, not least of which is Big Data, that justify a conference of their own. But as an opportunity to get people into one room from a mix of private and public sector organisations, to discuss the opportunities and challenges for widespread social media adoption in the workplace, it was very successful.

Oh, and my answer to the question of who’s leading?

Surely the answer has to be – the one who’s paying your bills.